Doubting I was actually going to get to McLeod Ganj following a cancelled bus, taxi and a near miss with a firework, I arrived in the early hours very damp and very cold. I knew I was up high as I hadn’t slept a wink with the winding road choosing instead to gaze out of the window, where everything was covered in a fine layer of dust looking like something out of a post apocalyptic film.

Rousing from my first night sleep I was dubious about what lay outside, but I needn’t have been when I opened my balcony to…:

No need to warn me to keep my vibes and ‘shanti’ in check Mr Guesthouse…I think I’ll be just fine here.

Taking to the streets to explore, I felt like I wasn’t in India anymore amongst maroon clad monks and smiling Tibetan faces. The only thing to bring me back was the occasional HOOOOONNNK and passing cow. Stopping for chai I met Julien a friendly French Canadian, who I’d actually seen earlier that morning bobbing about in shorts (brrrrr!) and then by Adam, a fellow Brit with an impressive travel beard. This was to be the start of a fun couple of days, and the quest for the peanut butter chocolate mo mo was born.

I agreed with Adams sentiment entirely, yet our conversation had become dominated by these two words. A mo mo is little steamed dumpling filled with veg or chicken, bit like a dim sum, but Julien had it on good faith that there was a place here that filled them with peanut butter and chocolate sauce. One transatlantic skype call and a lot of walking around later, (was it Peace cafe, Hope cafe? There’s about 10 places sporting both names) we were in possession of said mo mos. Like a warm oriental Snickers explosion in your mouth they were well worth the wait and we polished off a couple of plates before vowing to return for more the next day. 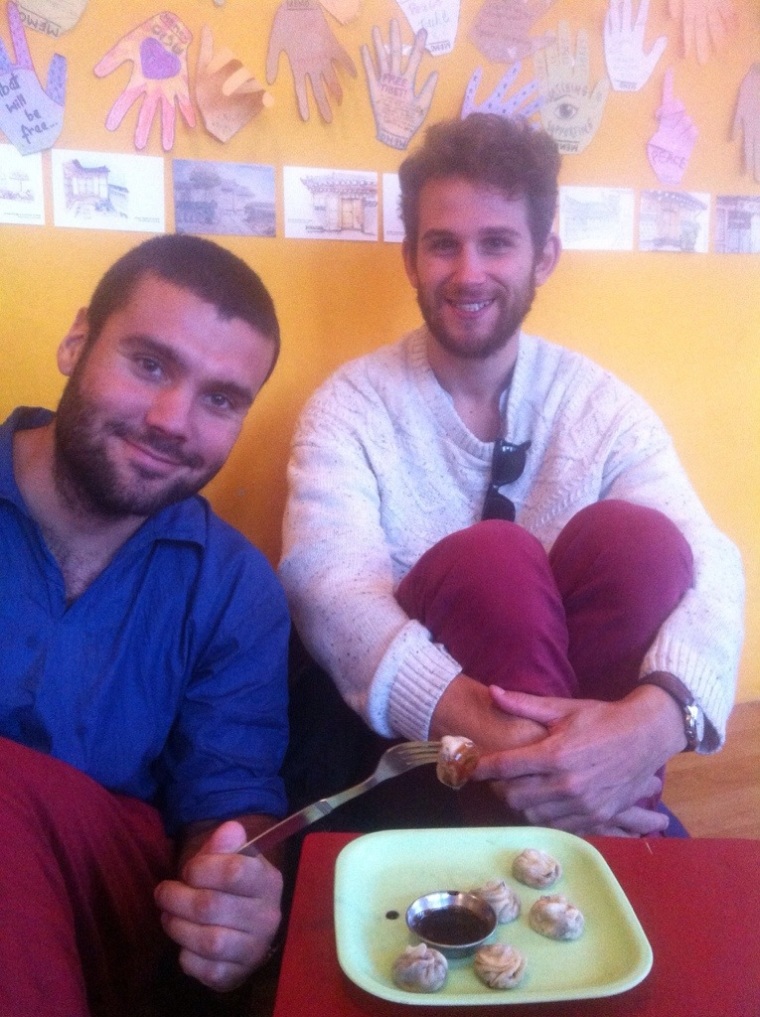 The following day in a fog of mo mo guilt I felt like I should actually get out and learn a little something about the Tibetan culture, this being the home of the Dali Lama and all that. I began with the main temple on the south side of the main street.

Removing my shoes and tip toeing around what looked like a monk parliament in session (lots of chanting, nodding and banging the floor with sticks) I was surprised to see stacks and stacks of Hobnobs offered before Lord Buddha. As far as biscuits go they’re in my top three, but if it was my god, I would have offered some chocolate covered ones for sure. It did make me chuckle though how this quintessentially British snack had found its way up here.

Recovering from giggles I visited the Tibetan museum where I learnt about the Chinese invasion and harrowing mass self immolations, over 90 in total, which have taken place in recent years in protest about the occupation, so sad given how gentle the people are here. I bought myself a book to read up more and got on my way.

Days passed peacefully in “Little Lhasa” and I could have happily stayed longer, but it was time to head for higher peaks and adrenaline in Manali a whole 12 hours away….

2 thoughts on “The search for peace, enlightenment and the peanut butter chocolate mo mo…”