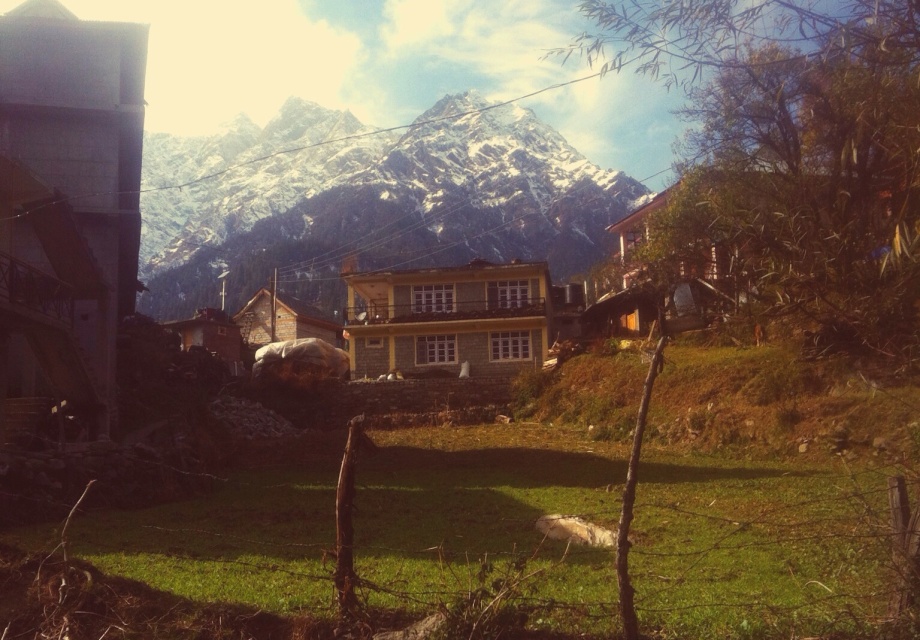 Travelling from McLeod Ganj on a twelve hour local bus I felt like I had had about six journeys in one winding through mountains, rivers, rice paddies and towering cliffs. Eventful as ever I had been thoroughly entertained by a range of characters along the way including a few month old Tibetan baby who stared and laughed at me for about three hours. However as we started to climb higher in to the mountains the weather became more and more bleak, which reminded me of how I usually feel when I arrive in Manchester from London!

I arrived a tired sodden mess dubious whether I was going to like Manali and wondered whether I should have headed the warnings that it is “too cold madam, or, not right season madam”. Though when I opened the door to my balcony the next morning and saw the beautiful snow capped peaks I knew I had made the right decision.

First on my agenda was to hire a bike. I love cycling and it’s my favourite mode of transport in any city, allowing me to pretend for a while that I’m a resident just out for a stroll. I got myself a big bad mountain bike and took to the roads, but soon turned back on realising I had no food, water or sun cream to take me the 15km uphill to Solong Valley.

I started out the next day armed with factor 50, water and enough Oreos to last out the week. The road was serenely quiet (a rarity in India!) and I passed villages where the women wore beautiful vibrant Aztec designs which wouldn’t look out of place on an East London hipster. As I passed we exchanged greetings of ‘Namaste’ and I felt totally at peace until…

Jumping off to push the bike up a steep hill (spinning was never my thing) I was confronted by the dog. Too fat and well fed to be a stray I though nothing of him until he started to growl at me. Trying to pass him and get on my way growls turned to snarls and he started inching closer towards me.

The first thing I thought was I’m really glad I invested in those rabies jabs, the second was, OH SHIT!! Getting closer, bearing teeth now, I called out for help and was just about to get on the ground in the vain hope that the dog would leave me alone before an Indian man came and rescued me. Grateful not to have been eaten I thanked him in Hindi and got on my way.

Recovering from the dog incident I stopped at the river to catch gather my thoughts. Scribbling away in my journal I didn’t notice the man now stood a few feet away from me who wanted to talk and invite me up to his house. Though he had a broad smile and a kind face I politely refused, feeling uneasy that he had crept up on me so quickly. I made a mental note not to stop so remotely next time and got going.

Hours and many calories burned later I arrived in Solong Valley, a winter wonderland where middle class Indians strutted around in questionable 80’s jump suits fresh from their first taste of paragliding. For me it was an entertaining insight into an Indian vacation and as the only westerner there I was in many many of their holiday photos.

Feeling tired and ready for my next Jamaican hot chocolate at the guesthouse I made myself a banging playlist and got ready for my descent. I knew coming down would be fun but I didn’t realise just how much fun! I felt like I was flying, just me and the road with the mountains behind me and I started to wonder if I could learn to ride a motorbike and return to India on a Royal Enfield for my next trip…