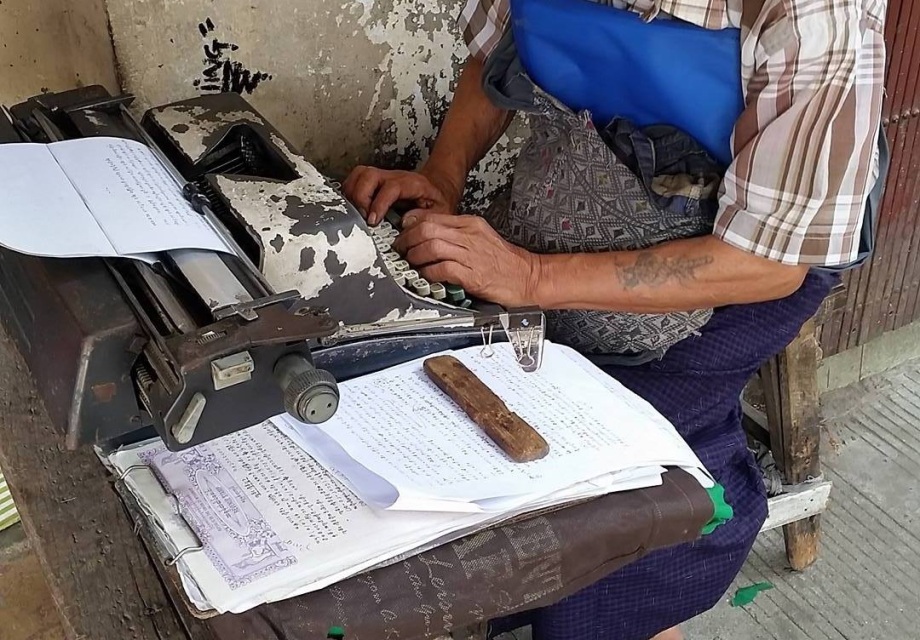 I have always advocated a love for big cities when travelling.

Destinations in themselves, they are not to be side stepped for a hasty getaway to beaches or temples, holding wondrously intriguing, if not unusual insights in to daily life.

Yangon was no exception.

After arriving late on Friday night after what felt like a million goodbyes in Canberra, we touched down in sweet, smokey air which transported me right back to India.

We had chosen Myanmar (formally known as Burma) for a three week holiday / jet lag reduction measure en route to Europe. I had heard nothing but good things, ogled countless images of Bagan and was hopeful that it was still relatively untouched by Chang vests, elephant pants and banana pancakes to appease my travel snobbery.

On first impressions Yangon was wondrously hectic, glowing with life in the morning sun, and to my delight, not a Chang vest in sight! After much walking and gawking as the glow turned to searing heat, Mr S and I agreed to take a walking tour the following afternoon to explain the delights of the city.

Now the tour itself was magnificent and deserves a platform of its own (coming soon), yet it was a throw away comment which is the subject of this post.

We were in downtown Yangon, colonial stomping ground of the British where every street corner reveals crumbling facades that wouldn’t look out of place in London, Bristol or Manchester.

In fact were in the Legal district: the High Court behind us, a huge, (yet disused) Law Courts building to our right and a sentencing court to our left. 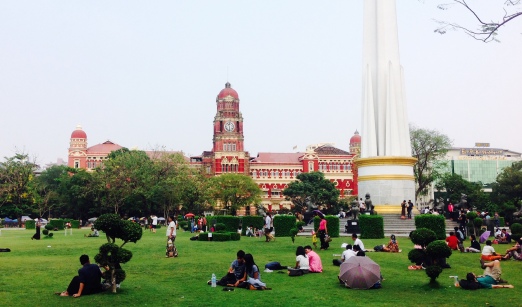 The former High Court as seen from Maha Bandoola Gardens 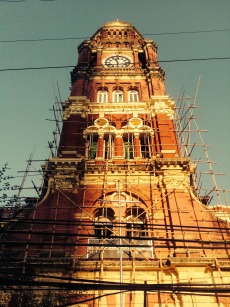 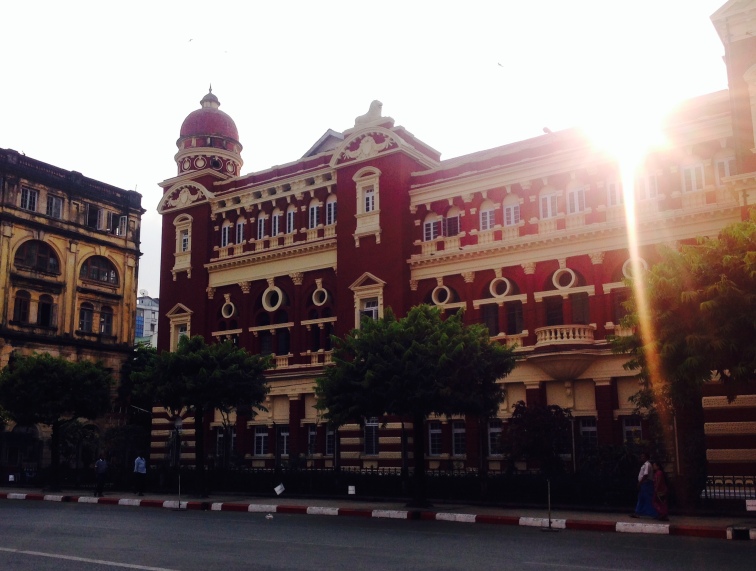 Back of the building

Nb: This building used to be the highest court in Myanmar, however in 2008, pursuant to the new Constitution, the Supreme Court of the Union was moved to purpose built capital Nay Pyi Taw.

Now used as a sentencing court, this building used to serve as the Accountant General’s Office and Currency Department

This in itself was enough to pique my interest, yet when it was mentioned that the street (currently deserted aside from a few lads playing football) would come alive in the morning with lawyers doing their thing, I had to come back and see it. 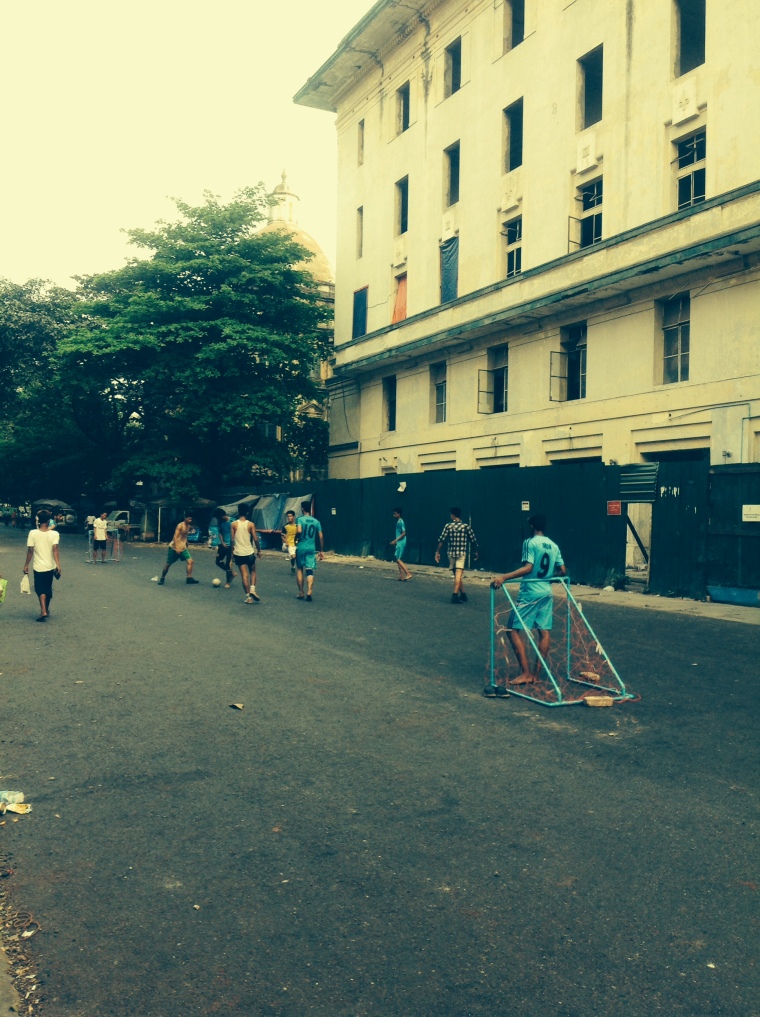 Boys playing football on a deserted Merchant Road which would come alive the following day. Note the building in the background, the deserted Law Courts building built in 1912 soon to become a hotel complex.

The next morning I dragged Mr S out of bed to head back to the street of fabled lawyers, Merchant Road, just behind Strand Road.

As promised the road was packed to the rafters with people and as we made our way down, a few stalls started to emerge advertising affidavits, powers of attorneys and other legalise looking documents typed in Burmese. 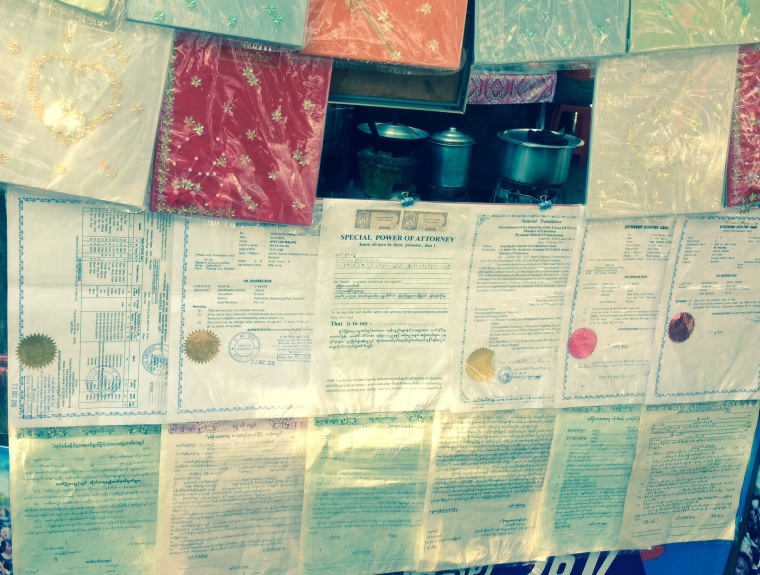 I took particular interest in an affidavit of marriage at one stall, where I pondered its wording and wondered what kind of status it would have when witnessed.

A man at the stall, seeing my interest, explained that the affidavits have to be made before getting married, though after taking a quick glance at Mr S assured me that this was only for locals.

I asked whether he was a lawyer and tried to explain that I was training to be one but it was lost in translation. Despite this, he made my day by gifting me the affidavit along with a reminder that it is only for the Burmese people, to which I am sure Mr S could have retorted that he had nothing to worry about! 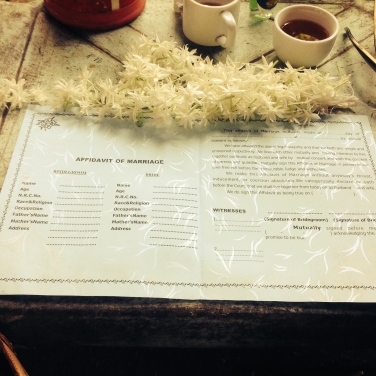 Moving further in to the legal bazaar, typewriters and their owners, mostly men in crisp shirts and longyi’s (the national dress) began to emerge and we ducked in to a little tea shop to set up a covert monitoring post.

Now I find huge discomfort in sticking a camera in peoples faces without permission and I was not about to start here, especially to my legal brethren who would no doubt question my intentions.

Whilst my pictures are hastily snapped I hope they can convey to you the seemingly open and informal manner in which lawyers were (presumably) making, breaking and creating contracts over tea and breakfast, noodle soup mohinga. 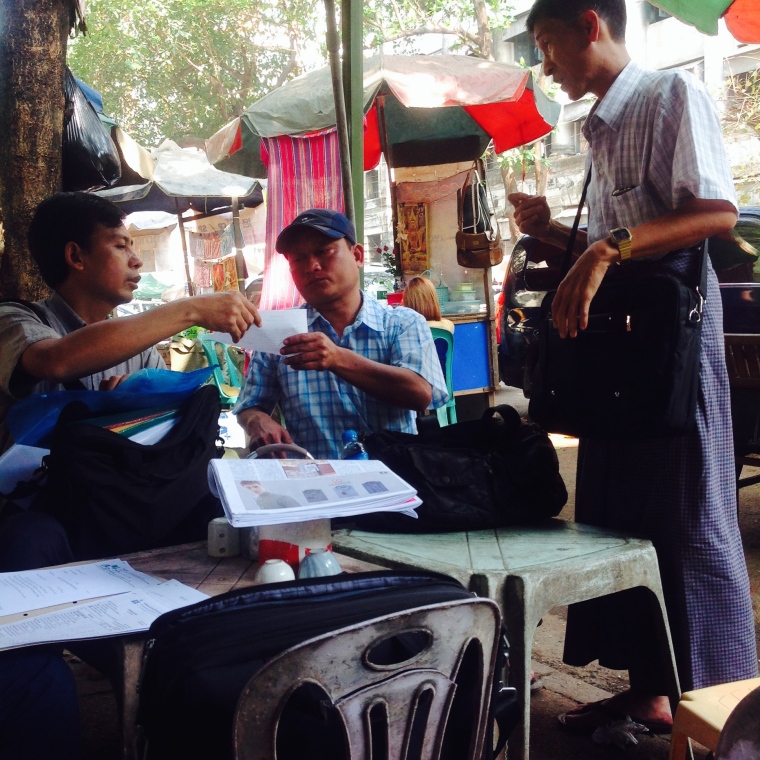 Studiously working out on the street. Picture courtesy of Sofiane, who I would meet later in Kalaw

One man who we observed for a while was very productive over a half an hour period with visits from at least three different clients. Money exchanged hands first, stacks of it actually which made me wonder how much he charges per billable unit, before documents were laid out and talks began.

Next came tea, loads of tea, nothing new here then as most of the lawyers I know run on a steady flow of caffeine to navigate through the day.

Order of the day: Tea and Mohinga

Whilst I couldn’t understand what they were talking about of course, the scene  looked pretty familiar, especially when fresh faced paralegals arrived, criss crossing the street with arms full of green files, delivering them to their bosses or perhaps to court.

What struck me most though was how relaxed it all felt, I mean how great would it be to take your office outside and people watch whilst you type up that contract for sale? That and the prospect of wearing flip flops to work is very appealing.

After much observation and intrigue it was however, time to head back. It was getting blisteringly hot and Mr S had been very patient and I got the feeling I could no longer bribe him with more tea and mohinga.

And so I left a happy woman, grateful that I had seen a snap shot of my future career choice playing out on the streets of Yangon – you certainly don’t see that every day.