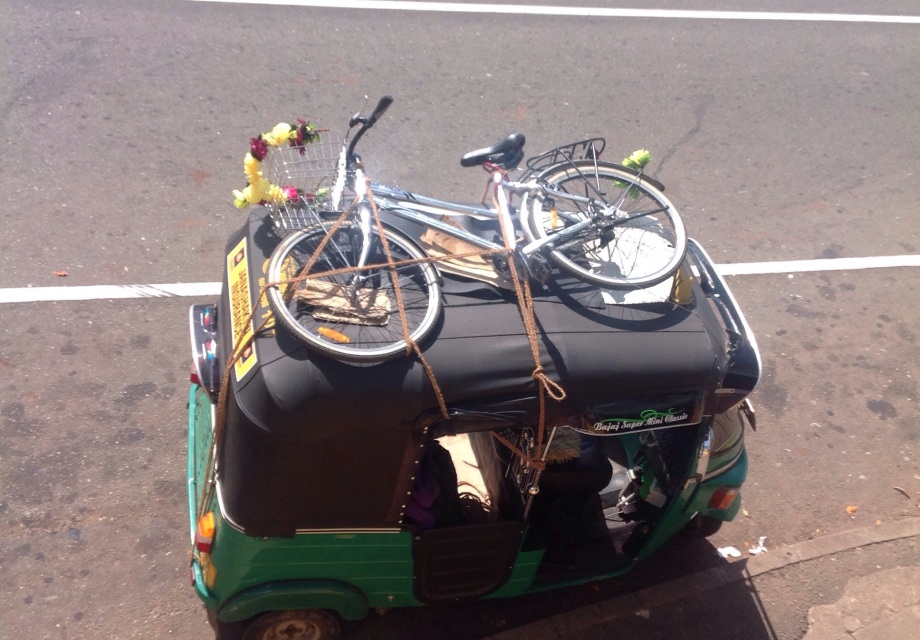 We’ve all heard the phrase killing with kindness. Well, on awaking in Ella at my-o-so cute guesthouse the appropriate term was killing with breakfast. My hosts, a lovely family running fledgling Lucky Star really had gone all out preparing enough food to feed me for the whole day. Unfortunately I’ve never been one to leave food that’s handed to me so I got through most of it, with the rationale that I needed it for the four hour climb to Ella Rock. 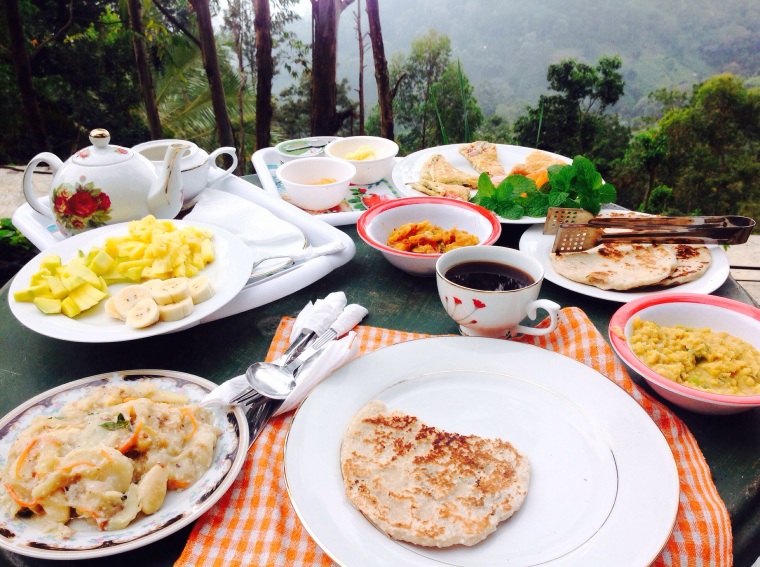 Meeting again with Dutch cycling powerhouse Iwan and Clara, we set off from the rail station with a treasure map. ‘The Book’ recommends a guide to find the rock but we favoured adventure, so went with the hand drawn version which included instructions such as “bear right and take the turning at the 167 3/4 mile post”. It was all very Harry Potter.

A very steep climb followed turning my cycle legs to jelly, but the view from the top was breathtaking, a blanket of green rolling hills as far as the eyes could see. I’d watched the scenery change quite dramatically since setting off by bike and being at the top of the rock served to remind me of how far I’d come.

Coming back down I actually fell asleep at the aptly named ‘Chilled Cafe’ in Ella town after one glass of wine. I wondered whether I was getting a bit too wholesome for my liking, it normally takes at least two to send me to slumber land. Rousing myself though I headed back to the guesthouse, earlier that day I’d discovered registration on Trip Advisor drew a blank from my hosts and I wanted to help them out in some way.

‘Technological wasteland’ would not be an unfair term to describe my relationship with the internet and all things technical. On reading that you needed to have a website to register on Tripadviser I thought my offer to help may have been a bit premature, but as I’d discovered somewhere a few days previously the most successful people after make a start before they are ready, so I figured I’d give it a bash and make something really simple. Four hours and a mountain of chocolate bourbons later they had a website and pending registration of Trip advisor. You can check out my handiwork here and do look them up of you’re planning on visiting Ella.

it’s all about the climb

The following day marked my last day of cycling and boy did I save the best road till last! Taking the final journey as a joint one we rode through tea plantations and tiny little Tamil villages on a road that ran spectacularly close to the hillside edge. Though the journey to Haputale was only 23km it was mostly uphill which really put my three gears to the test and I arrived feeling like I’d literally conquered a mountain. 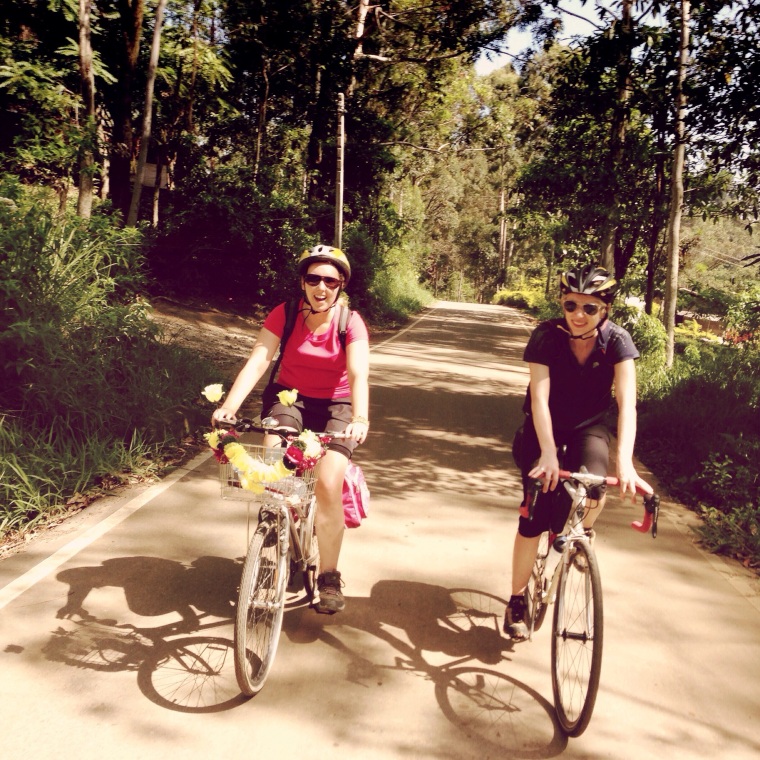 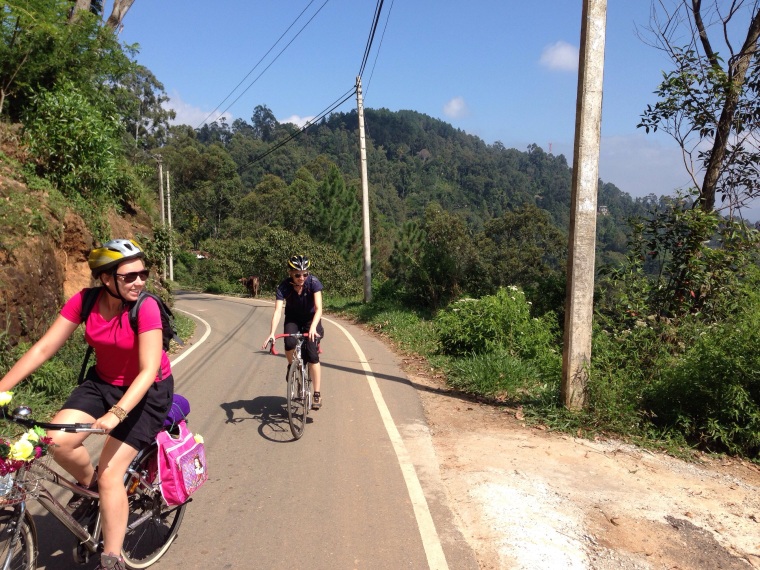 Adding up the kilometres later that evening I reckoned I’d covered 325km (200miles) over 11 days of cycling. I had real doubts that I’d be able to do it before I started out, not being at my fittest coupled with tropical weather and kit fudged together from tat heaven, but it all worked out and it reinforced in me that you should always do the things you think you can’t do.

A farewell to Iwan and Clara followed with the unenviable challenge of trying to get myself and Bianca back to Colombo. Previously I’d had no trouble sticking her on the train but this time round I’d encountered some ‘computer says no’ bueurocrats who flat out refused to take her. I’d noticed that Sri Lanka loves a department, each more fanciful than the next (think ‘the Department of Energy and Windmills’) and made my own conclusion that they secretly loved making simple things drawn out. Still, I was determined to get her back, somehow…

What do you mean she won’t fit? You’ve got about a million sacks of onions up there! C’mon!

About an hour in I realised this was not going to be easy. Haputale was in the back end of nowhere, no one really understood me and the local dogs wanted have a pop at me even when I wasn’t on the bloody bike. Some good natured guys were trying to help though and kept promising “Next bus madam, next one have store”. But the fabled bus with the magic storage never came, despite some of them having a whole manner of things on their rooftops, which is where I met enterprising Ali and his tuk tuk. For a mere 5,500 rupees (£25) he promised to deliver Bianca and I the 200km to Colombo. It was a good price considering the distance and I reluctantly agreed, bought some rope and helped haul her on top. She sustained a few injuries but at last we were on the road.

It was a funny old journey and Ali, myself and Mr Plank (holding up the tuk tuk roof) bonded a little on the way. I bought him lunch, he bought me a coconut, I explained why I wasn’t married (for the 206th time) and he told me all about his wife and mistresses. This didn’t surprise me one bit though, he was tooting away at anything that moved as we approached Colombo, some things are the same everywhere I guess..

The next day brought challenge number two: get the bikes shipped to Melbourne. As I cycled to Pettah market for my fifth visit I felt right at home, cruising through the crowded streets ringing my bell and raising bemused smiles. Just as I thought I’d been mega organised in finding out the post office closed at 8pm I actually discovered they closed at 3pm (that bureaucracy again..). As I thought my bike dreams were shattered the shop owners offered to arrange the shipment for me the following day, leaving me completely in their hands. I had a good feeling about it though, so I handed over the cash and left to sort out my departure.

And so as the bus crawled it’s way throughout traffic towards the airport I smiled a big smile, content that I’d finally connected with the country that ignited my urge to travel nine years ago and feeling confident that this wouldn’t be my last visit…