Following on from ‘Dog Gate’ I was a little apprehensive on leaving Habanara for the 38km to Giritale, just outside of Polonnaruwa. Setting off at 8am (and not before) to avoid the wild elephants which I had been warned were “Very fast! Very dangerous madam!” I waved goodbye to my delightful host and got going.

A get out of map reading free card…

The route was delightfully simple, to the junction, turn left and keep going, one that even I could manage without getting lost. Heading out of the town under moody skies, I took the A11 jungle road bordering Minneriya Giritale Nature Reserve. The elephants sure had been there and I saw the evidence dolloped across the road, the views nonetheless were stunning and I had to pinch myself to concentrate on the road. 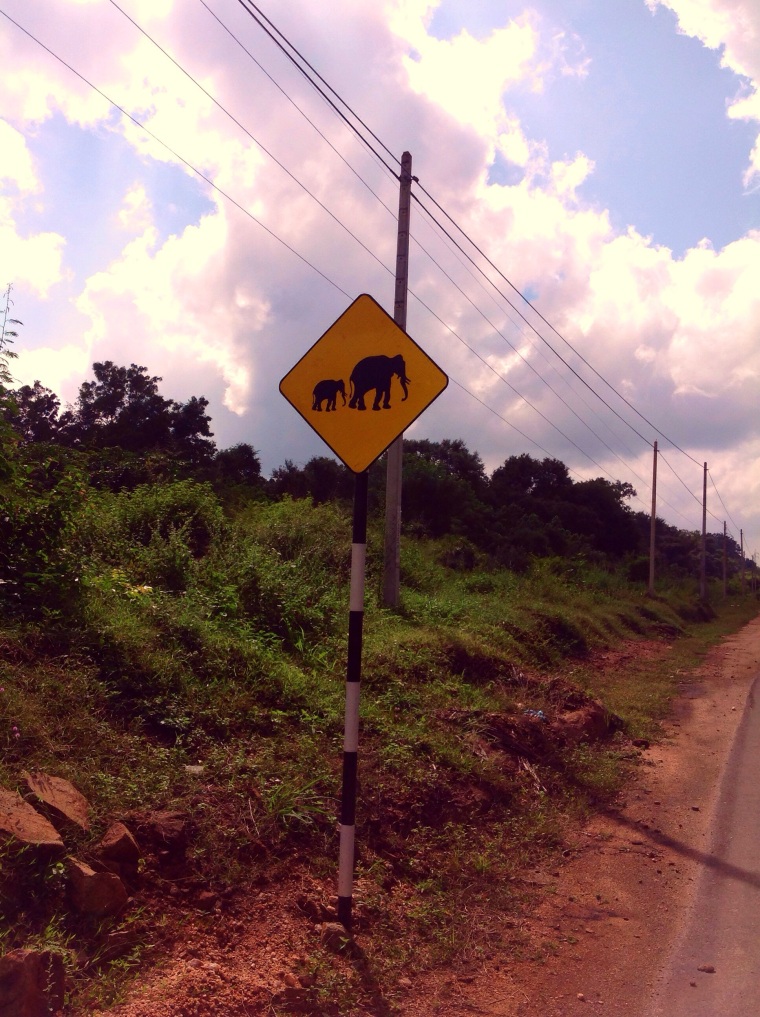 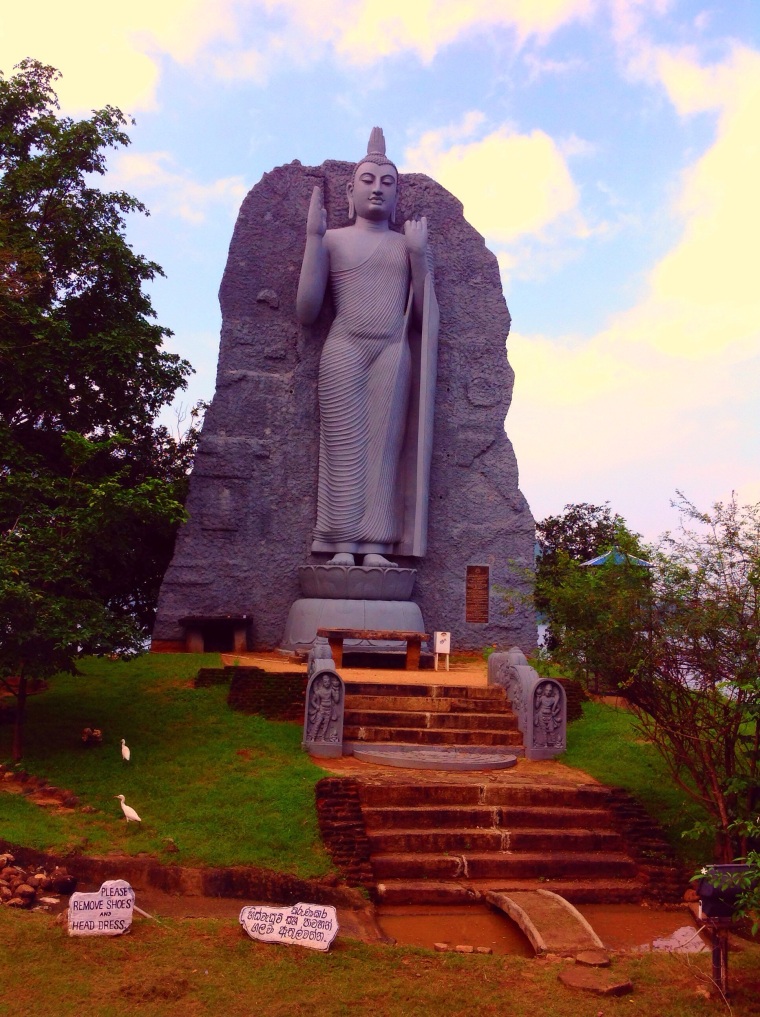 I made excellent time and was settled in to Rice Villa, the best (and most peaceful) place I’ve stayed in Sri Lanka by 11am overlooking neon green rice paddies. After staying in some real dives this place was complete luxury (for a mere £18 a night) and I sat on my porch and did nothing all day.

Later that evening I got chatting to the chef. Assuring him that I didn’t mind getting my hands dirty and wouldn’t be a pest, I was able to bag myself a cooking lesson in the family kitchen. Sri Lankan food comprises of lots of little dishes accompanied by rice, many of them spicy. I didn’t appreciate how much work went in to each one and with 7 dishes on the go, I was scribbling like mad trying to keep up. This led to a ‘Friends-esque’ naming technique of ‘the beetroot one’ or ‘the one with pumpkin and the seeds that kind of look like mustard seeds but aren’t mustard seeds one’.

The end result was pretty amazing though and I will be translating my scribble in to a recipe to feature on under Girl Gone Eats shortly.

Taking it easy on the legs I ventured out to explore the ancient city of Pollonuwara 8km south of Girtale. This was my first big culture site, looking a little like Jurassic Park minus the dinosaurs. Making my way round Bianca was popular as ever and a good talking point for chatting to guides hanging about for Russian or Korean tour groups. This meant I got a free vicarious tour, taken inside an ancient Hindu temple to be told all out making offerings to the Shiva lingum ‘to make baby inside’. I didn’t have the heart to tell my free guide that I couldn’t think of anything worse right now (she was already traumatised by the fact I wasn’t married) and I backed out slowly without making an offering.

After a few hours of walking round though my stomach started to hurt and puff up like a ball, looking like the shiva lingum had worked an immaculate conception on me. Stopping ever 10 minutes to sit down, a wave of advice followed to cure my ills; from drinking pure lemon juice, ginger beer and soda water. I duly tried them all which thankfully made me look and feel normal again to continue enjoying the sights. 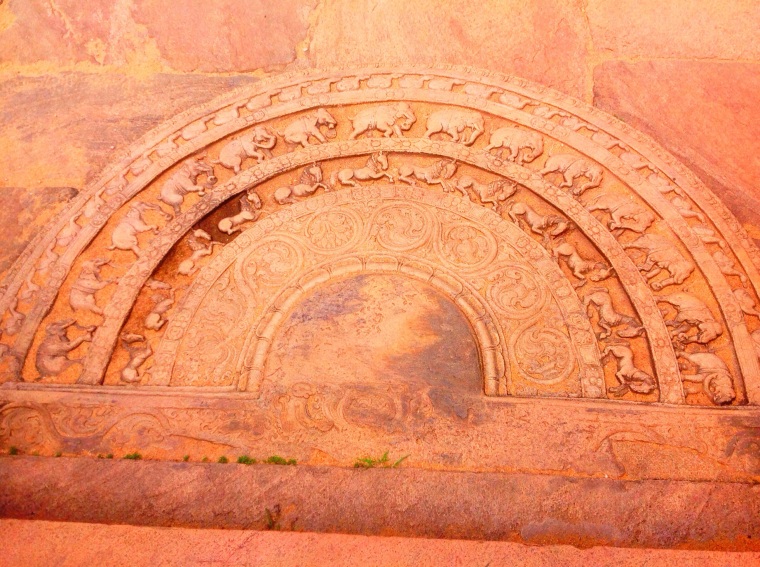 Making my way out I was peddling along and heard a thud on the road. Looking down, a massive long green snake had dropped out of the tree a mere 20 inches in front of me.

I’ve never used my back brake so effectively.

For a minute I thought he was going to have a go, as he looked as shocked as I was, but my stopping must have helped as he slithered away pretty quickly. I’d heard the fable of “drop bears” but never drop snakes before ….a few moments earlier and it may have been a different story.

The next day marked the start of a 62km journey to Dambulla, home of some famous caves. The previous day I had met a fellow cycling couple from Holland and we took the same route, though they were on road bikes so way quicker than me. Still we ventured to see the caves together which were spectacularly painted inside on uneven surfaces, a bit like a fancy wallpaper job gone bad. It didn’t take long to look around and we stopped to admire the view and some monkeys playing in the trees.

And then it happened.

Now I like to think of myself as a grown up (most of the time) and one who could handle the sight of a little monkey love. As mr and mrs monkey went at it we were all stood together finding it mildly amusing, just as mrs monkey decided mr monkey wasn’t up for the job and scarpered. Undeterred though mr monkey decided to go at it solo. It’s at this point that our faces started to change in confusion but the worst was yet to come (if you excuse the pun) as mr monkey finished up and decided to chow down on his prize as he looked us all right in the face.

I wish someone had taken a photo of the three shocked western faces at that moment, it would have told a thousand words.

And so we left shaken, and with very vivid memories of the caves at Dambulla…