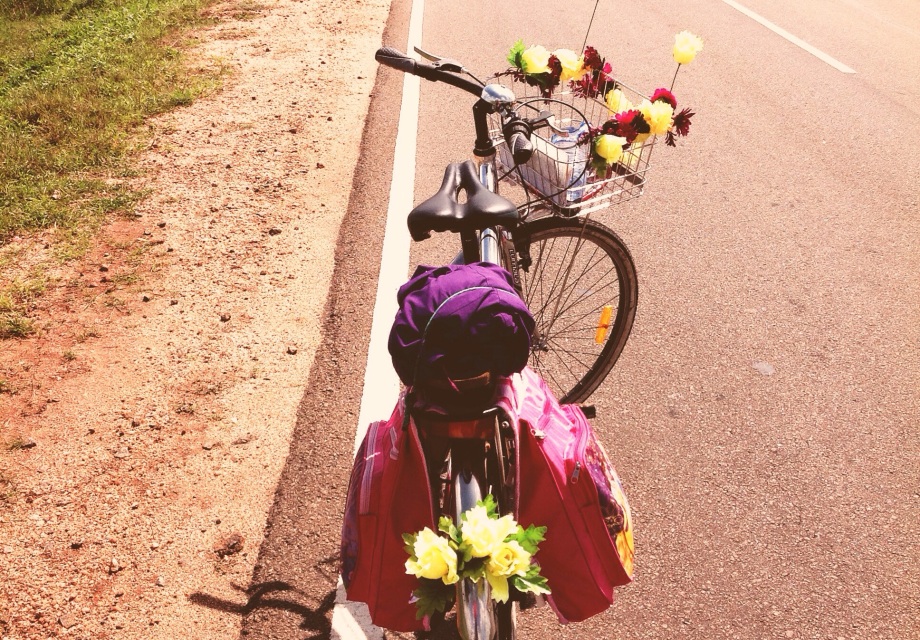 I set off on Monday morning all excited with my Disney panniers in tow. I’ve never been one for packing light so having all my worldly belongings for a few weeks in two small children’s satchels was in itself a small victory.

The train ride to Anuradhapura was a pleasant one and I hung out of the doors (which were wide open) listening to Paper Planes imagining I was in Slumdog Millionaire. Arriving, I was dubious to whether Bianca had also found her way, but was delighted to find that even though the stations look ancient, their practices mustn’t be, and she was right there waiting for me in another adorably quaint storeroom. 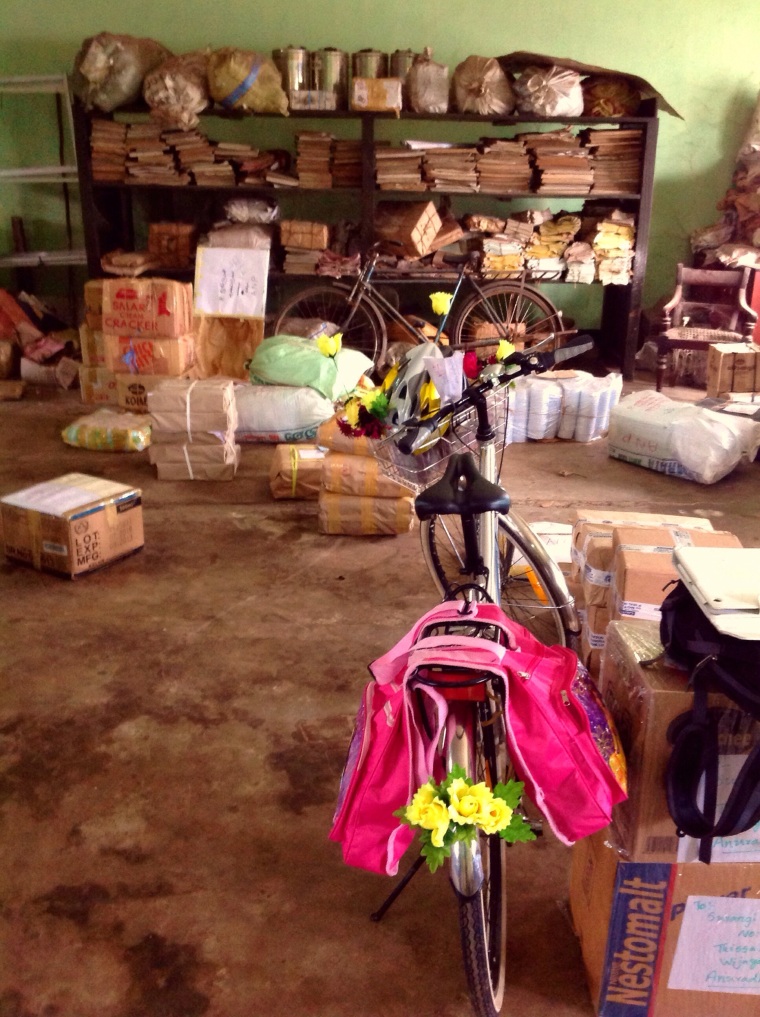 Next up was my first challenge – find the hotel. My book (aka ‘The Book’ for any ‘Are You Experienced’ fans out there) told me it was about 1.5km away, a doddle by bike I thought.

Imagine the worst person you know at reading maps. Then multiply it by 100. That’s me. –

It took me an hour to find it. AN HOUR. In which time I went through a roller coaster of emotions from anger, fear to why the hell am I doing this bike trip. Oh and it was raining too, and I don’t think home made princess panniers were made for rain. Still, I reached my destination and spent the afternoon looking round a really old temple in a cave (complete with bats!) meeting the worlds happiest police man and choosing a families lottery tickets for the week over rice and curry.

You can always trust a Policeman..

But how can we contact you if we win?!

Can you cycle in a monsoon?

Is what my google search bar read at around 6.30am on Tuesday morning. The skies had been continually ominous the previous day and I awoke to an absolute downpour losing where I was for a moment (Manchester…?) I also remembered that sometimes you can see wild elephants en route and had visions of being chased by them all angry, wet and confused by the rain. So I made a judgement call to stay put and wait out the storm. 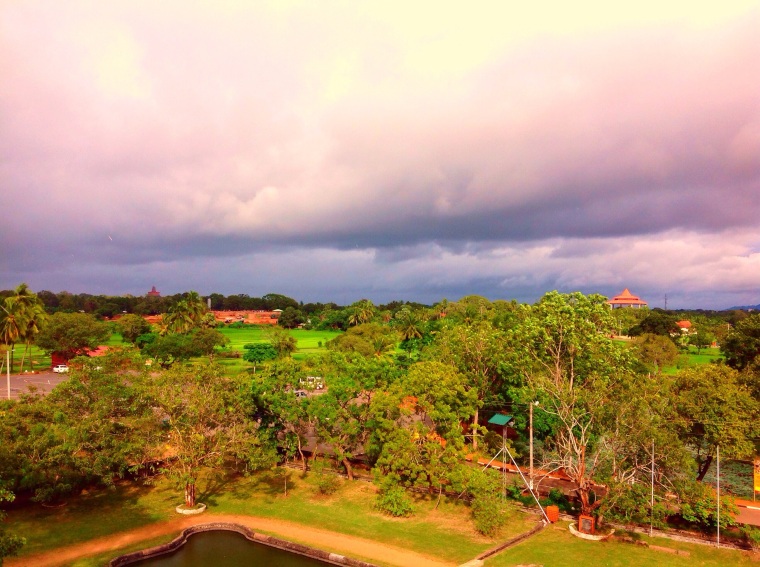 With a whole extra day to myself I decided to prepare for the task ahead with an Ayurvedic massage and steam bath. Set up like an actual doctors surgery, I watched with amusement people come and go picking up their prescriptions of strange colored juices and tonics, wondering how sick you had to be to drink that one..

Preparing for my massage I was handed a pair of ‘respectable pants’ which were huge paper bloomers that almost came up to my waist, I’d rather have had some indecent pants! The massage was wonderful though and the steam bath left me all smooth and floaty ready for a good sleep. A huge dinner of rice and curry followed where I took my responsibilities to ‘carb up’ very seriously indeed.

Clouds cleared I set off for my first stint at 8am. Turning on to my first A road I was amazed at how wonderfully smooth and quiet it was, nothing like the schizophrenic driving I’d witnessed on the south coast. Picking up some speed and cruising past fields and hills I slowed down to approach my first village feeling great, until..

It started as a growl that progressed to being full on chased down the street. Turns out they can run as fast if not faster than your bike and just after I’d got past one another came. Despite an encounter with one earlier in my trip (see, ‘The Dog, the River and the Mountains’ I wasn’t prepared for this and was pretty jittery when I stopped about half a kilometre down the road. There was nothing for it though except to sling some rocks in my basket, scoff some biscuits and vow to act more like a car in future so they would leave me alone.

Pressing on I covered the first 30km with relative ease and continued for or the next 28. Averaging my time around 18km an hour I reckoned I’d be there quickly, but the sun came out and I was starting the feel the burn in more ways than one. Stopping for a rest I stumbled on a funeral. Despite the sombre occasion my bike and I seemed to lighten things for a bit and I left with a fistful of hastily scribbled addresses and many smiles.

It must have given me the boost I needed as I arrived half an hour later. Hot red and more sweaty than I think I’ve ever been, I dived in for a shower more satisfying than the first one after Glastonbury and hung up my comedy shorts until tomorrow..